The 631E came standard with a four-stroke 3408 turbocharged V-8 engine which generated 450 flywheel horsepower and propelled the fully loaded scraper up to 30 mph. This included a direct-injection CAT fuel system with individual, adjustment-free injection pumps, variable injection timing and water jacket aftercooling. A 24-volt electric starting system with an ether starting aid was included for use in harsh temperatures. An electric monitoring system oversaw critical functions of its operation.

Tractor and scraper together weighed 95,000 pounds when empty, but over 171,000 pounds when its 75,000 (~31 cubic yds) capacity load was maxed. The scraper could cut as deep as 17.2” with a blade width of nearly 11.5’ giving it substantial ability to remove and relocate large amounts of top soil. They were frequently utilized to level and/or flatten areas that were turned into housing developments, parking lots, and shopping malls.

Caterpillar released the 637E which had the benefit of  a second motor situated behind the debris bin. This gave additional power, traction, and a slight increase in speed although the scraper’s capacity was largely the same. 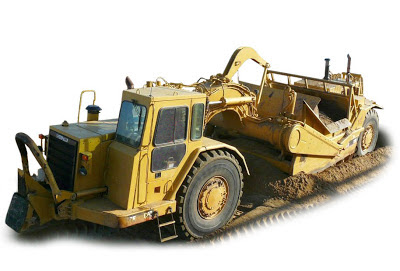 It isn’t unusual to see more than one 631E or 637E working in the same area at a time. While they can be run single file, they are more often seen side-by-side (offset a little bit) working in a loop, scraping off dirt in one area and depositing it elsewhere as needed. The scrapers popularity and quality is well evidenced thirty years later as these machines can still be found turning mountains into mole hills.

10% Discount for all Payments with Bitcoin. Dismiss